This isn’t the first non-profit project my friend, Debbie Nichols, and I have worked on before. But this time, in 2011, she brought me the opportunity to build Families Called to Duty. Their mission is to support stateside military families of deployed service men and women.

Debbie’s motivation stemmed from first-hand experiences as her enlisted daughter was deployed to Afghanistan by the Air Force. Debbie and husband Alan went from ’empty nesters’ to parenting their two granddaughters during that deployment. It was an eye-opening experience. While their journey was a challenging but positive one, Debbie realized that not everyone has the resources to have the same successful positive outcome.

Debbie felt so strongly that she needed to share her experience that she wrote a book about it. Her mission: to offer insight to fellow military families so that should the time come, their family is better prepared and knows where to find various forms of available support before the need arises. Subsequently granddaughters, Ivie and Bailey (with Debbies help), wrote a book following a Q&A structure for deployed kids too. In their book, Deployed Kids, the girls help to reassure fellow deployed kids and deal with their unique challenges.

Debbie had also been invited to meet with White House Administration staff in Washington D.C. to be briefed on how to become more effective in her pursuits. So an internet presence was needed to provide a landing spot to help others become informed.

I think in this instance the design process speaks for itself. I incorporated the Blue Star flag (a symbol for deployed families), the American flag, a few iStockPhotos images and I grabbed a few shots from Debbie’s Facebook photo album. We think it worked out nicely.

Visit my Dev portfolio to see more sites by pcgs 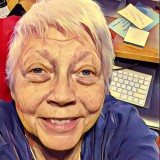